For the last few weeks of February, the UK has been soaked by a succession of winter storms that have seen the most extensive flooding for a generation. As we sit under February’s leaden skies, a new even more frightening threat barrels in to cheer our winter hearts, a brand-new flu like virus that spreads like a common cold. Coronavirus, an Asian flu pandemic has gripped the nation and whipped up a media maelstrom. Earlier this week, the six nations rugby game, Ireland v Italy, was cancelled. The bars of Temple Bar will not be happy.

Whilst not wanting to appear complacent, when we hear experts rather than journalists speak about the Coronavirus (or COVID-19 its medical name), they say there is no need to panic. The virus appears less deadly than either the previous SARS or MERS epidemics, and if the correct procedures, which are all in place, are followed, the virus can be contained. The World Health Organisation has not called it a pandemic yet. Even if they do, one laboratory in Glasgow has said they would have a vaccine in commercial production within 6 months. (This is not the Spanish Flu that devastated European populations after WW1, as much as some newspaper headlines would have you believe.)

Even so, you will be feeling nervous – even fearful – of the sudden falls in stock market valuations. As I write, the UK stock-market has fallen by 9% since February 12th. Manufacturing is already suffering from the interrupted supply chains, self-isolation, cancelled events and restricted travel will undoubtedly hit International tourism hard. Economic growth and company profits across the globe will suffer. (On a brighter note, the reduction in economic activity will be a bonus for the animal kingdom.) So, let’s not kid ourselves, the immediate economic outlook is gloomy and stockmarkets will probably exaggerate the downturn.

But does this mean we should panic-sell? Absolutely not. It would be the very worst thing to do. And here is why. Have a look at this graph: 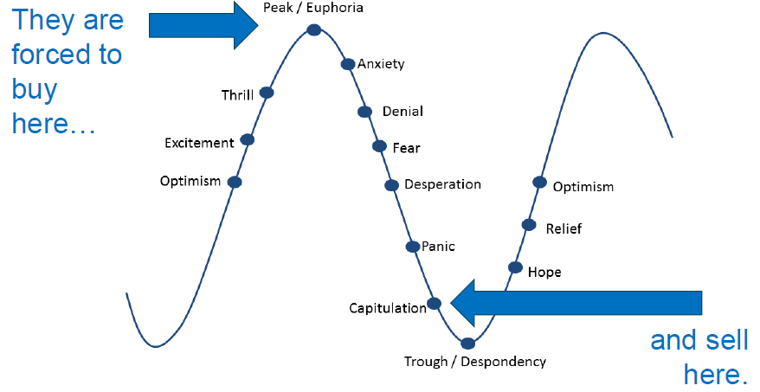 It shows how investors who panic-sell fall into the age old trap of “buy high and sell low.”

At the risk of repetition, here is a quick resume of why you chose to invest your savings with Hamilton Financial

In conclusion, unless you have an immediate requirement for funds, our advice is to sit tight. In a few months, when the virus is under control and productivity and supply chains get back to normal, spirits will inevitably rise and so will valuations. Indeed, it is worth looking back to the height of the SARS and MERS outbreaks when these events actually proved to be a good time to invest. So, if you are sitting on cash which you do not need, give me, Simon or Victoria a ring.